I want to tell you a happy story, but it involves a little bit of angst, but first there is a happy thing, and it has a happy ending, okay?

OK. I thiiiiiink I’ve told you about this before, but shortly after I was diagnosed, my friend Nate gifted me with a subscription to Loot Crate. It’s a monthly subscription box full of geeky fun things, and it’s a delight to receive every month. I ADORE surprises in the mail, and it’s been a bright spot once a month, and Nate is an amazing person for doing this for me. I always love seeing what awesome things they’ve come up with. Sometimes it comes with a shirt, I once got a glow in the dark Tron pencil case (cough cough makeup bag), a plushie facehugger from Alien, a kickass bank in the shape of Hellboy’s fist, the list goes on.

There’s a point to this beside Nathan is OSSEM and I love geek things, I swear.

I was so enamored of the stuff, that when Loot Crate upped their game and offered a wearables-only subscription, I was all over it. A shirt and TWO! TWO PAIRS! of socks every month (OH MY GOD I LOVE SOME SOCKS YOU GUYS) (no really you have no idea) (seriously two drawers overflowing) and it was a done freaking deal. This month I got a pair of Nightmare Before Christmas socks (squee!), a pair of Walkign Dead socks with weapons screenprinted all over them (hee hee hee) and a baseball jersey style shirt emblazoned with the logo for Weland Yutani, the company from the Alien movies. It’s RAD.

I went to see Dylan Moran on Sunday – he’s an Irish comedian who’s been in a lot of things I love (Shaun of the Dead, Black Books), and I decided to wear the jersey. And here is where things get sad. Apparently I was having a really low mana day, I don’t know why, but when I let go of the walker to climb in to the car, I fell. Not a dramatic OHMYGODWEAREGOINGDOWN but just a ‘welp, gravity is a true theory and we all must obey’ kind of slide to the ground. The corner of the car door caught me under my arm and I grasped at it to avoid going down hard, and I heard this awful rip. It was almost comical for a minute; I knew I had to let go of the door, because I couldn’t recover from the fall, but I could hear the ripping get worse and I was inwardly cringing.

Puce was a freaking champion of champions, he was by my side in a flash and had lifted me to my feet before I quite knew what was happening. He hugged me tight and said it was okay, we were still going to go out and have the BEST NIGHT EVER, and helped me back into my apartment so I could change my shirt. I hadn’t even had the effing thing on for an HOUR. I did a pretty good job of not losing my shit. He said maybe Loot Crate would replace it. I said I hoped, but didn’t think so, because it’s not like it’s Loot Crate’s fault I have ALS and fell and ripped my shirt.

I sent them an email that night anyway. Maybe I could buy a new one? They sometimes sell their crates, later, but even though I didn’t need a whole new set, maybe they had a spare shirt I could pay for. It was worth a shot. I sent them this email and photo:

SUBJECT: A Tale of Woe-land Yutani

TL:DR at the bottom. <3 Ok so I had tickets tonight to see Dylan Moran (he's awesome, go see his show if you can), and busted out my brand new Weyland Yutani shirt for its inaugural outing. I headed out to the car, and..well ok, I have ALS (Lou Gehrig's Disease) and my legs don't work well anymore, and as I was getting in to the vehicle they said EFF YOU and I fell. I flailed around for something to catch myself on, and instead the car door caught the shirt as I went down and it ripped. Really badly. Luckily it kiiiinda slowed my fall so I wasn't hurt, yay~! But my brand new jersey I hadn't even had on for an HOUR is now ruined. TL:DR; is there a way I can buy a replacement JUST for the shirt and not have to hope you guys sell this crate later? Even if you can't, thanks for being awesome. -Vashti 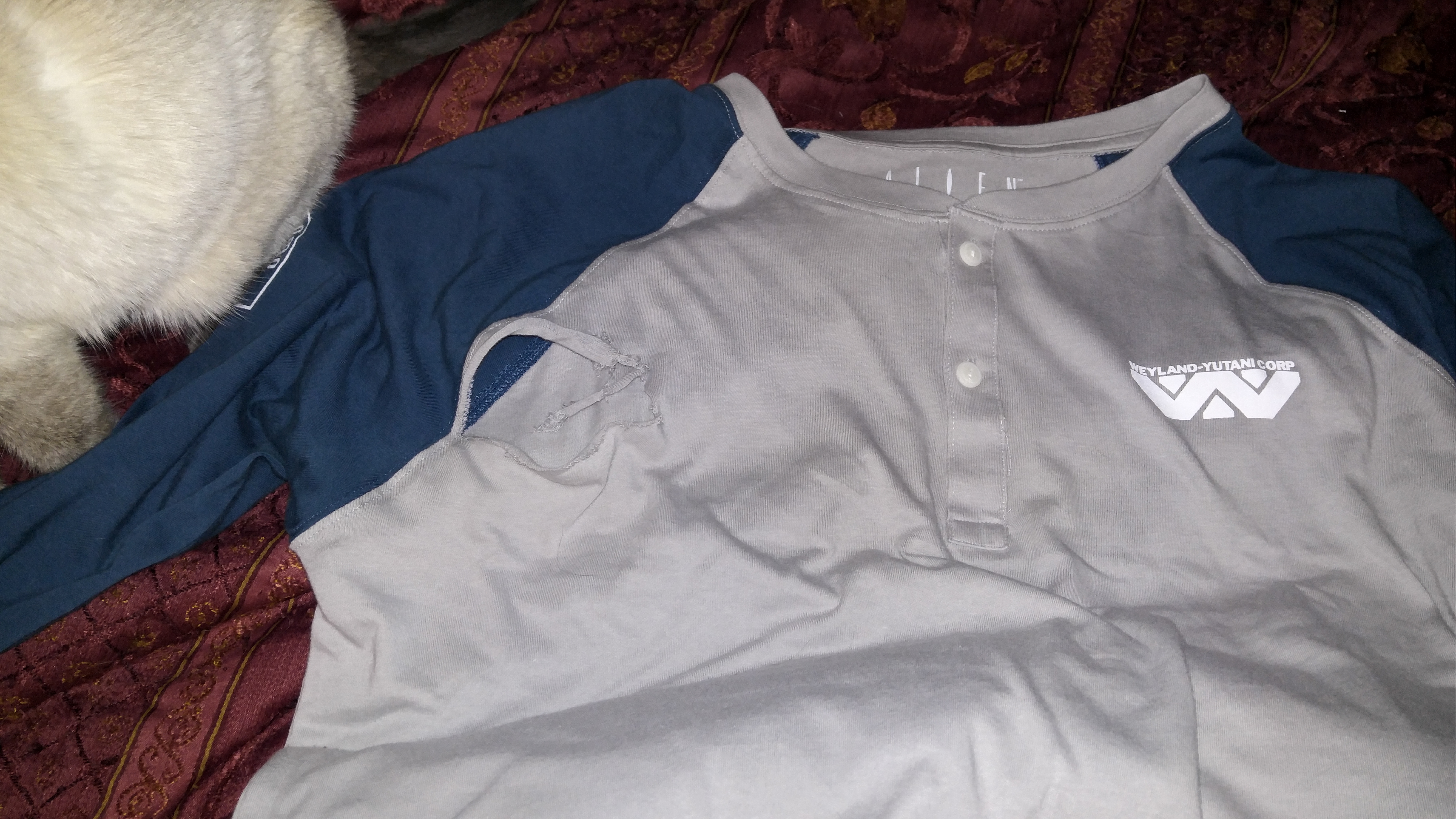 The next day I got a reply:

I’m sorry to hear of your woes! As a one-time courtesy for being a loyal Looter and providing a photo of not only the torn shirt but including your kitty as well, I will get a replacement out to you. Due to inventory changes at our warehouse, we ask that you allow up to 10 days for your replacement to ship. Once it has been processed, you will receive an email with new tracking information.

We would like to apologize again for the late delivery of this item. Thank you for your patience and understanding!
Thanks!

LOOT CRATE IS AMAZING. Keith is amazing. I am not sure what Team Marvel is, but it would not surprise me if the Loot Crate offices are divided West-Side-Story-Style into Team Marvel and Team DC and instead of fighting in alleys they play with action figures and make “pchew pchew pchew” noises at each other over their cube walls (“Cyclops got you with his eye beam!” “NUH-UH, Wonder Woman deflects it with her bracers!” “Her bracers would not be able to deflect his eye beams unless they were made of ruby quartz!” “SHUT UP NO ONE EVEN LIKES CYCLOPS HE IS LAME.” “YOUR MOM is lame!” “Craig do we have to go to HR again?” “….No. But Batman would kick Cyclops’ ass any day. He is like the Aquaman of the X-Men.” “GODDAMMIT CRAIG THAT IS IT.”), and have heated arguments in IRC over who is better, Deadpool or Lobo.

……I digress. But! Thanks to Keith, and apparently to Parmesan being a butt and refusing to let me take a picture without him walking all over everything IN THE WORLD, I have a new shirt coming. SO that is excellent. ALS can’t ruin everything when there are awesome people in the world like Nathan and Keith. My world is an awesome place with fabulous people in it.

…Deadpool would totally kick Lobo’s ass, btw. This is a fact.

I suck at asking for help.

I know, you all are alerting the media right now. OH MY GOD REALLY!? DID YOU ALSO KNOW THAT WATER IS WET? IT IS TRUE!!

I’m getting better at it I swear. I will give the soda bottle one good try and then hand it over to someone for opening. I allowed friends to help with cleaning my apartment. I’ve brought jewelry out to the car on our way somewhere, for J to help me put it on rather than just not wearing it. I trust folks to help me up a curb without feeling like I’m going to pull us both down to the ground. It’s hard, and it’s definitely going to be a continuous work in progress until I no longer have the OPTION but to let people help, but there are definitely areas that I have a harder time with than others.

I don’t know why that’s such a trigger. Because it’s gross? Because my cats are not technically part of ME and so admitting I need help caring for them when they are not a medical necessity seems …frivolous? Even though I would literally rather die in a house full of shit than live without them? Because my cat Parmesan is 22 years old and shits wherever he wants and right now my front room is so absolutely goddamned GROSS that I am mortified at the thought of someone else having to deal with it?

But I have to.

I got a notice of inspection when I came home Tuesday; they’re coming in to check the fire alarms. No big deal. But yesterday I had to clean the cat box area, because that’s the first thing you see (and smell) when you come in to my apartment, and it needed doing. I’ve got puppy pads spread out all over my dining area, because Parmesan does what he wants and I can’t stop him and I love him enough that it’s a price I will pay for his company. The carpet is …unhappy with its lot in life, at this point. And that’s a fair part of why I had laminate floors in my house, because once a cat pees on something it is RUINED FOREVER. AND EVER. Cat owners know this. No amount of Nature’s Miracle will ever completely get rid of the smell. And so I just lay out the puppy pads so that hopefully Parm pees on them and then Ianto will NOT try to bury it and drag them all over the place trying to scratch over it, exposing the carpet where Parm will inevitably pee again. J steam cleaned the carpet not long ago, but it needs doing again. Until then, the spotbot and puppy pads will have to do. It’s not easy for me to do this, because I can’t just bend down to pick up the soiled pads, and crouch down to scoop the box. I have to get on the floor, which is less like “getting down on the floor” and more like “a controlled fall”. Then, pulling out the tray from the litter robot (SERIOUSLY BEST THING EVER), replacing the bag, collect all the pads, put out new ones, scoop out the other box, somehow get up off the floor, heft the heavy bag of used litter into the trash can, and then put it outside.

It didn’t used to be a huge production. Twenty minutes, tops.

Last night demonstrated that I can’t do this anymore. I couldn’t carry the water tanks for the spotbot without dropping them. I couldn’t effectively scoop out the boxes. I had the worst time opening and levering a box of cat litter to refresh the boxes. My hands wouldn’t uncurl after grasping the puppy pads. I had to use two hands to spread them out instead of the casual flick it used to take. I almost was unable to get off the floor when I was done, and I was out of breath and dripping sweat.

I can’t do this anymore.

I had a really, really hard time telling myself this last night, as I cleaned myself up and waited to stop sweating. And I don’t know why I’m so stubborn about this, but it seemed like it was the end of all things. I know it’s not. I’ve had friends volunteer, cheerfully, to come over and help with the cat boxes. It just seems like a special brand of failure, to no longer be able to do this. When I adopted my cats, I promised to love them for all time, and to be responsible for their care. I feel like I’m failing them at it. I am losing the ability to give them head skritches, to play with them, and to give them a sanitary place to do their thing. And it’s the worst. I am failing at Cat Mom, and it bothers the fuck out of me.

I’m not dealing gracefully with this at all.