I talk about this a lot, apparently.

Thanks for sticking with it, and with me.

Every day is a voyage of discovery.

I have recently discovered that I can no longer stand up from a seated position without either swinging my arms wildly in front of me for counterbalance, or using my hands to lift my butt off the seat and pitch forward. I have also discovered that I can’t go in to my backyard when it’s muddy anymore, not even to close the shed door because it’s raining hard and the floor inside is getting soaked, because I WILL fall in the mud and bend my umbrella and muddy the hell out of my hands and knees AND lose the freaking key for the shed lock somewhere in the grass. I have also discovered that I can’t step over the threshold of my house without pulling myself up on the door frame or something. Stairs are becoming akin to mountain climbing.

I’ve had two proper falls since the last Amtrak one. I fell on a wet inclined driveway with mulch while getting out of a car. That didn’t hurt too badly except for very nearly ripping my middle fingernail off. That really sucked. And then I had a fall in my driveway while carrying things inside the house. It was my own fault, I was carrying things with both hands and I have recently discovered that well, I should not be doing that. The fall wasn’t horrible, I didn’t break anything, just skinned the hell out of my elbow and landed on my foot wrong enough that my big toe was a solid bruise for a few days.

On the plus side? My arms are fucking BUFF now.

I had my follow up appointment with Doctor Goslin last Wednesday. We mostly talked about meds, new insurance, and stupid administrative crap. She checked my strength in my thighs and hands and arms and was satisfied with the rate of decline – there wasn’t any. My calves, though, are basically devoid of useful muscle now and my feet are done. When I don’t wear shoes in the house, my feet just drop on the floor with each step – I call it froggy feet. I don’t walk down the stairs so much as clomp.

The last time I saw her, she recommended a sleep study to see if maybe my exhaustion was in part because I don’t sleep well. The sleep study found mild sleep apnea – no surprise, it runs heavily in my family – but nothing to explain the lack of energy. I’ve got a follow up study on Valentines Day, how romantic! And I’ve been referred to a pulmonologist to see if they have any recommendations about that, but I’ll probably be getting a CPAP machine. It will help with keeping my lungs strong, if nothing else, she said. I can see that. I have no idea how the cats are going to handle it. It doesn’t make so much noise once it’s on your face, but still.

Today, we start the voyage of discovery that is med changes. I was out of Nuvigil about a week before I had my appointment with her, and OH MY GOD the difference. I went straight back to sleeping 18 hours on the weekends and nearly falling asleep at my desk all the time. I went home from work and crawled in to bed with my laptop and passed out at like 9, those nights. Because this is a new year, new insurance, she tried to prescribe me adderall again, and gave me samples of Nuvigil just in case.

Insurance denied the adderall. But not a blanket denial! Just..she had prescribed one to two a day, and they only covered one. It’s the second to lowest dose of it, and I was only ever going to take one anyway, but it took a couple of days to sort it out. And by couple of days, I mean I just got it yesterday. Today’s the first day, we’ll see what happens.

It’s a world of flux and change, even if I have the answers. I know I’m going to lose my ability to walk, but it’s a question of when, and discovering daily the new can’ts. I discovered that I can’t function without some sort of energy med. I don’t have an answer why not, yet, but it’s a new can’t.

But sometimes can’ts are not a bad thing. I can’t do this on my own, because I have people who love me and won’t LET me. I can’t stop moving forward, even through all of the can’ts, because I have so many people carrying me.

I can’t stop believing things are okay, because I know they will be. They’re gonna SUCK and be full of more can’ts than I could ever imagine, but somehow, it’ll be alright. Things will work out.

It can’t happen any other way.

I have probably thought about this entry a hundred times, and started it a dozen. I don’t even know where to begin except to state that I am beyond privileged, and indebted to total strangers at a level I never even dreamed. I don’t have the proper words to put down what’s in my head, to write and entry that isn’t just:

So allow me a moment, if you would, to freak out. I’ll try to keep this coherent.

My best friend works for a non-profit called WUSATA, who are dedicated to helping small agricultural business expand their business to global markets. They’ve been longtime supporters of ALS research at her office; they sponsor a team for the Walk to Defeat ALS every year, and for last year’s ALS Awareness Month, they had a Casual for a Cause campaign in which employees were allowed to wear jeans to work, three times a day, for a donation to ALSA.

When her boss learned that I was afflicted, she was incredibly supportive of me, allowing Danielle the time off from work to ferry me to appointments and coordinate my care. She sent the loveliest emails of support, and they were some of my earliest exposures to the amazing phenomenon of genuine concern and assistance from strangers. Her office raised a lot of money for ALSA for this year’s walk, and then they went one further. Andy, the Executive Director, proposed – and the rest of the team agreed – that WUSATA would hold Casual for a Cause again, from October through the end of the year.

A charity campaign directly organized to be of specific benefit to me personally. When Danielle told me, I cried. A lot. I was powerfully overcome with..more than gratitude – a sense that the universe works itself out sometimes and takes care of people and maybe karma was a real thing. Beyond flattered, speechless and just…

I mean, who the fuck am I even, that an entire office full of people should care enough about me, I’ve never even MET them, to help me. Even if they get to wear jeans as a result, I mean, seriously, who the hell am I to benefit from such a thing? I felt very …HOLY SHIT YOU GUYS OMG OMG OMG.

Danielle told me by phone chat after the meeting was over. I stared at the phone for awhile, my mind in static buzz, the phone screen becoming blurry because I just…lost my shit. And cried.

Before this happened to me, before all of this drama, I never knew what it was to cry from joy. It was foreign. But now, more than once, this time more than anything, my chest felt like it was going to explode, I was so happy I was freaking out a little.

They sent me a check. The card was adorable. Look! 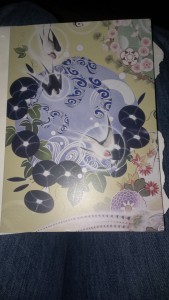 And they wrote the sweetest message inside: 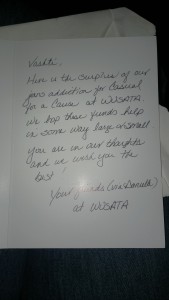 And I am so indebted to Danielle, who championed me and made this possible.

Art by a-cat01, words by Joseph Fink, from Welcome to Night Vale.